In 1883 a young woman named Teena Rochfort Smith created a prototype of an experimental edition of Hamlet which, to this day, remains the most visually complex presentation of the play ever attempted.[1] Even present-day digital interfaces such as the Enfolded Hamlet are less ambitious than what Rochfort Smith envisioned, which pushed Victorian typography and printing technology to its limits. Given Hamlet‘s unique complexity within the Shakespeare canon, and Shakespeare’s textual complexity within the larger canon of English literature, Rochfort Smith’s prototype should rank among other great experiments in humanities interface design, including Origen’s Hexapla, the Complutensian Polyglot Bible, Robert Estienne’s 1550 edition of the Greek New Testament, the New Variorum Shakespeare begun by Horace Howard Furness in the 1870s, the BBC Domesday Book project (an experiment, if not a great success), and more recent digital humanities projects such as the Versioning Machine, which visualizes the relationships among variant texts of the same literary work. Although Rochfort Smith’s story is a tragic one—she died very young, and has been remembered mainly as Frederick Furnivall’s mistress—she was nonetheless a proto-digital pioneer in an area that’s booming in the digital humanities today. She accomplished all this as a Victorian woman in a male-dominated field, and she did so by the age of twenty-one.

END_OF_DOCUMENT_TOKEN_TO_BE_REPLACED

The modern form of Hallowe’en isn’t particularly Victorian in its origins (unlike Christmas and Valentines Day), but there’s something very 19th-century about it nonetheless. Any holiday that celebrates ghosts is one that calls attention to the past’s uncanny tendency to manifest itself in the present, like the unquiet dead. Hallowe’en’s aesthetics are thoroughly Victorian, gothic, and pseudo-medieval, drawing our attention backward in time. It’s at this time of year that I’m most reminded how much of our present world, especially architecture and infrastructure, is composed of layers sitting atop what was laid down in the 19th century. For example, my neighbourhood in Toronto has several infamous leaning houses (scroll down at the link), whose foundations are sinking due to a buried creek beneath them, the result of a badly implemented infrastructure project begun in the late 19th century. At Hallowe’en, however, these crooked houses look just right. They’re a reminder that the past has unfinished business with the present, and Hallowe’en is its appointed reckoning day.

In that spirit, I thought I’d write a  ghost-themed post about a curious photographic artifact that I recently encountered in my research, in which layers of past images coalesce into a strange apparition. In 1885, one Walter Rogers Furness (the son of Shakespeare Variorum editor Horace Howard Furness) undertook an experiment to reveal Shakespeare’s true face from among the various surviving portraits and sculptures, as well as Shakespeare’s death mask. Furness attempted to do this by taking semi-transparent photographs of all these images of Shakespeare’s face, and then layering them over each other in different combinations to produce a composite. That composite, so the theory went, would reveal the true face behind the representations, channeling the long-dead subject like some photographic Ouija board (another 19th-century new medium, so to speak).

END_OF_DOCUMENT_TOKEN_TO_BE_REPLACED

Review of Leah Price, How to Do Things with Books in Victorian Britain (Princeton University Press, 2012; 350 pp.)

Two of my favorite marginalia examples from my local rare book library show annotators doing unexpected things with books, both very much in the spirit of Leah Price’s innovative approach to the topic. In one example (below), an English translation of a French drawing manual, published in 1777, an unknown annotator has drawn a musical staff with a melody and numbers representing intervals in a D-major scale.

In the other example (right), one Samuel Maude apparently decided in the summer of 1792 to keep a diary in the margins of a 1747 copy of Samuel Johnson’s Plan of a Dictionary of the English Language. You can see how Maude used his limited writing space economically, winding his entries around pages and leaping over gutters like a hurried graduate signing a high school yearbook. Yet the experience of reading Maude’s diary all the way through is surprisingly natural, provided you doesn’t get distracted by Johnson’s text, and are willing to keep rotating the book as you turn the leaves.

H.J. Jackson has described the marginalia of annotating readers as a “contested goldmine” for scholars looking for evidence of reading environments and readers’ experiences of texts—”contested” because marginalia aren’t always the windows into readers’ minds they might appear to be.[1] What I like about these two marginalia examples is that neither annotator seems interested in the printed texts of the books. Rather, they used these books for their basic material qualities as ready-to-hand writing surfaces. The musical annotator clearly found an aptly shaped blank page in the writing manual, whose oblong octavo format suits musical notation, just as it suited the book’s content when printed in 1777. The diarist Samuel Maude’s thinking, by contrast, is less easy to reconstruct. Instead of purchasing one of the numerous ruled blank-books that made up a good chunk of the book trade in the eighteenth century, he selected a thin printed book that was already 45 years old, and contorted his entries into limited space, while sometimes leaving other margins unfilled. Studies of marginalia almost always focus on notes that comment upon the texts at hand, as evidence of reading, but Leah Price calls us to think about unreaderly uses for books, like Maud’s, and their implications for cultural history and reception studies. END_OF_DOCUMENT_TOKEN_TO_BE_REPLACED

As I’ve been finishing off the manuscript for my book The Shakespearean Archive: Experiments in New Media from the Renaissance to Postmodernity, I’ve been realizing that a spin-off project could explore the new media demo as an emergent performance genre with a cultural history of its own. This should be a familiar genre thanks in part to Steve Jobs’s sense of theatricality in his Apple rollout presentations, which serve as a kind of technology theatre. Another famous tech demo from the era of modern computing is Douglas Englebart’s so-called “Mother of All Demos,” which gave the world its first look at now-commonplace features like a windowed GUI, a computer mouse and pointer, word processing, hypertext, real-time collaborative document editing (think GoogleDocs), and teleconferencing — and this was in 1968 (!!). (There’s plenty of surviving video of this particular demo, which is worth a look.) Considering this kind of event as a cultural and social phenomenon — and as a performance susceptible to critical interpretation — is something I often do with my students, and someday I’d like to teach a course on the cultural history of the tech demo at U Toronto’s iSchool. END_OF_DOCUMENT_TOKEN_TO_BE_REPLACED

From cave sketch drawings, to fountain pens with ink wells, to writing with a pencil to a pen, to typewriters, to printing materials, to using computer typesetting, we’ve moved from an oral society, to a written one, to a digital one.

From the late 19th century to the 1970s, Linotype was the industry standard for typesetting and printing newspapers, magazines and posters. Now, the publishing industry uses offset lithography printing.

The Linotype type casting machine was called the ‘Eighth Wonder of the World’ by light bulb inventor, Thomas Edison. The Linotype revolutionized printing and society. To celebrate what the machine allowed us to do, the Faculty of Information at the University of Toronto is pleased to present the Canadian premiere of Linotype: The Film, a feature-length documentary centered around the charming and emotional story of the people connected to the Linotype and how it impacted the world. Already, premieres from around the world have been sold out. END_OF_DOCUMENT_TOKEN_TO_BE_REPLACED

Last week I met Fiona at Manic Coffee, where I learned many fascinating things from her about Victorian photography and the evolution of trust in reproduced images. (She had been giving me some really knowledgeable and generous feedback on one of my book chapters — I recommend we all besiege her with similar requests, all at once…) One of the things she mentioned was Thomas Hardy’s lesser-known novel A Laodicean (1881), which apparently contains textual hijinks such as the touching-up of photographs, the faking of telegrams, and conflations of different Shakespeare plays in the same performance as a ploy to cover sexual transgression. (!!!) Encouraged by all this absurdly useful material for my book chapter, we set off to check a couple of used bookstores down College Street, but couldn’t find a copy. (Though I did find a copy of Tesla’s autobiography, which should be good for some even stranger posts down the road. Btw, I mean this Tesla, not that one, though neither really got the credit they deserved…). Anyway, this afternoon I looked at some early editions of A Laodicean in the U of T’s Fisher Rare Book Library, including a triple-decker published in London in 1881, the year of the novel’s publication, and a single-volume illustrated American edition from the same year. I suspected the American edition might have been one of the many piracies of British novels that would happen nearly simultaneously across the Atlantic, especially with well-known novelists like Hardy. Being a lazy non-Victorianist book historian — who leaves actual reading to his smarter literary friends, and then mooches research ideas off them — I flipped through the volumes looking for illustrations as my entry-points into the text, and as potential material to discuss in my book chapter. The London triple-decker contained no illustrations, but the American single volume contained several, one of which you can see below. However, I really don’t know anything about Hardy’s publication history or the textual history of this particular novel, which I haven’t even read. END_OF_DOCUMENT_TOKEN_TO_BE_REPLACED 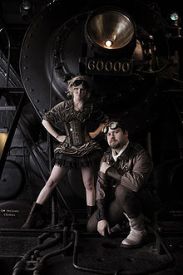 I’ve been noticing a persistent, sustained interest in steampunk in the various mainstream outlets of geek culture (a phrase I use with affection) such as the Gawker blog io9. (For example: http://io9.com/5917187/gorgeous-portraits-of-steampunks-jetpack+wearing-superwomen) We could probably list dozens of examples of steampunkery in popular culture, from video games to movies to prog-rock concept albums and so on if we wanted to. I have a different question, though — one I’m asking as a fan and marginal practitioner of Victorian studies rather than someone trained and based in it. Has there been much substantial work on steampunk from within Victorian studies, as distinct from fields who study science fiction in the present? Is steampunk something that matters, or should matter, in Victorian studies these days, or has it run its course — and if so, what was that course? END_OF_DOCUMENT_TOKEN_TO_BE_REPLACED

Gregory’s last post on Babbage and railroads, illustrated by that arresting Montparnasse train wreck photo, got me thinking about Victorian visual technologies and their ability to register accidents as phenomena. At the same time, Daniel’s analogy between aircraft data recorders (black boxes), on the one hand, and Babbage’s proposal for their 19th-century railroad equivalents, on the other, got me thinking, too, about technologies with unexpected histories. We know that 19th century technologies like film and photography changed how people thought about time and experience, but there’s also something about 19th century technologies that makes them seem, themselves, prone to accidents of chronology. The conspiracy-theory subgenre of pseudoarcheological “out-of-place artifacts” seems like good fodder for the kind of alt-history thinking that Victorian studies has absorbed from steampunk. END_OF_DOCUMENT_TOKEN_TO_BE_REPLACED

As my first test-post, I thought I’d pass along a recent exchange on the Humanist email list. This doesn’t fall squarely within Victorian studies exactly, but it does play on some familiar Victorian themes like machine anxiety and the boundaries of automation. Note that although the given date of the first post is March 31st, it first showed up in mailboxes on April 1st… END_OF_DOCUMENT_TOKEN_TO_BE_REPLACED